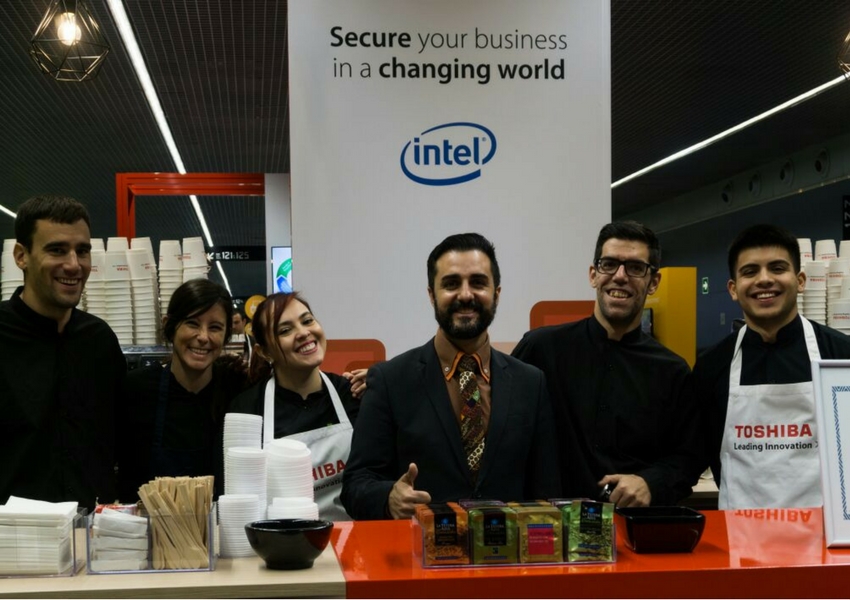 Hello coffee friends, do not miss the impressions of what was the most spectacular and challenging event of 2017. Here reflected with words and images how exciting it was to be there. Live it with us!

Xavi Iglesias at one of the coffee points

What it is about: a major meeting between businessmen, lecturers and technology professionals, from the most varied places in the world. You could hear there people talking in multiple languages and at the same time in one. That´s why the group of baristas called to work, had to master at least two languages, it was not easy to gather the necessary number of waiters and baristas to serve the thousands of attendees who participated during the 6 days of this event.

This important and internationally recognized meeting could not be accommodated simply anywhere. The International Convention Center of Barcelona (CICB), resulted in one more year as the ideal location. A giant enclosure, and quite labyrinthine, where getting lost could be really easy. The largest rooms, a huge auditorium, 4 levels linked by a tangle of stairs and elevators like those seen only in movies. Put on some good work shoes and follow us!

A bloated program of lectures on everything that is new in the world of technologies, had the guests very busy. The site was filled with executives, promoters, companies of all kinds, and a swarm of workers that made all the machinery run well oiled. These cracks of technologies had to be kept awake and there we were, more than ready waiting for them with 26 barista points, strategically distributed by the 4 levels of the International Convention Center. It would take liters and liters of coffee, for these businessmen to maintain good levels of concentration among so many talks. Remarkable brands like Toshiba, Lenovo, Microsoft, Spinnaker, and others were part of the companies sponsoring the coffee spots.

For you to figure out the scope of this international event, I tell you as an anecdote that at one moment we served a flat white to a man with an elegant but simple appearance, he was one of the speakers. He told us quite naturally that he had just gotten off a helicopter, that he was coming to give a lecture in Sydney, he was giving another one in Barcelona, and the same day he was leaving off New York. And there he was, having a coffee with us as, so relaxed. Awesome, all another dimension, a level to stay amazed.

A recognition for the guys in the department responsible for the catering. After a hard work and a lot of organization, they managed to create an environment full of delicatessens, in a scenario of delicious things that was practically magical. What to say about the sweet section: nougat of unexpected ingredients, ice cream and crepes, candys and biscuits to lose control, all presented divinely on a wonderful balcony overlooking the Mediterranean.

Of course, accompanied by the best coffee and animated by a troop of baristas who shone like champions during really long days, that lasted from 8 to 16 uninterrupted hours. Just lovely, they´ve beaten all records.

How an event of such magnitude is organized

Well, working in advance, a lot of organization and setting in motion a human machinery that involves countless sectors. Bear in mind that to attend such a large number of assistants, we were going to offer up to 35,000 coffees in 6 days! Everything has to be very controlled, the supplier of the blend created exclusively -and presented conveniently in special capsules- should be prepared to bring extra boxes in case of need. Inside the CICB site, armed with a walkie-talkie and sports shoes, a technician specialized in coffee machines ran along the corridors in case one of them failed, since we put a lot of pressure on them.

The figure of the “firemen”

Within the team of champions baristas that made up the group capable of carrying out such an event, there were some in particular who were in charge of “putting out fires” of those 26 points scattered throughout the site; quickly managing any need for stock or technique. Wearing extra comfortable tennis to run what were real miles of corridors and levels (maybe next year we´ll get them on skates or bikes), they flew to help the baristas who faced endless lines of customers eager for coffee. A dynamism and resolution never seen.

It was a big challenge, but we managed to get it through successfully, thanks to those who participated and became fully involved with a professionalism and commitment to applaud. Thanks to everyone and see you at Gartner 2018!!

“In love with coffee and service”

This website uses cookies to improve your experience while you navigate through the website. Out of these, the cookies that are categorized as necessary are stored on your browser as they are essential for the working of basic functionalities of the website. We also use third-party cookies that help us analyze and understand how you use this website. These cookies will be stored in your browser only with your consent. You also have the option to opt-out of these cookies. But opting out of some of these cookies may affect your browsing experience.
Necessary Siempre activado
Necessary cookies are absolutely essential for the website to function properly. This category only includes cookies that ensures basic functionalities and security features of the website. These cookies do not store any personal information.
Non-necessary
Any cookies that may not be particularly necessary for the website to function and is used specifically to collect user personal data via analytics, ads, other embedded contents are termed as non-necessary cookies. It is mandatory to procure user consent prior to running these cookies on your website.
GUARDAR Y ACEPTAR